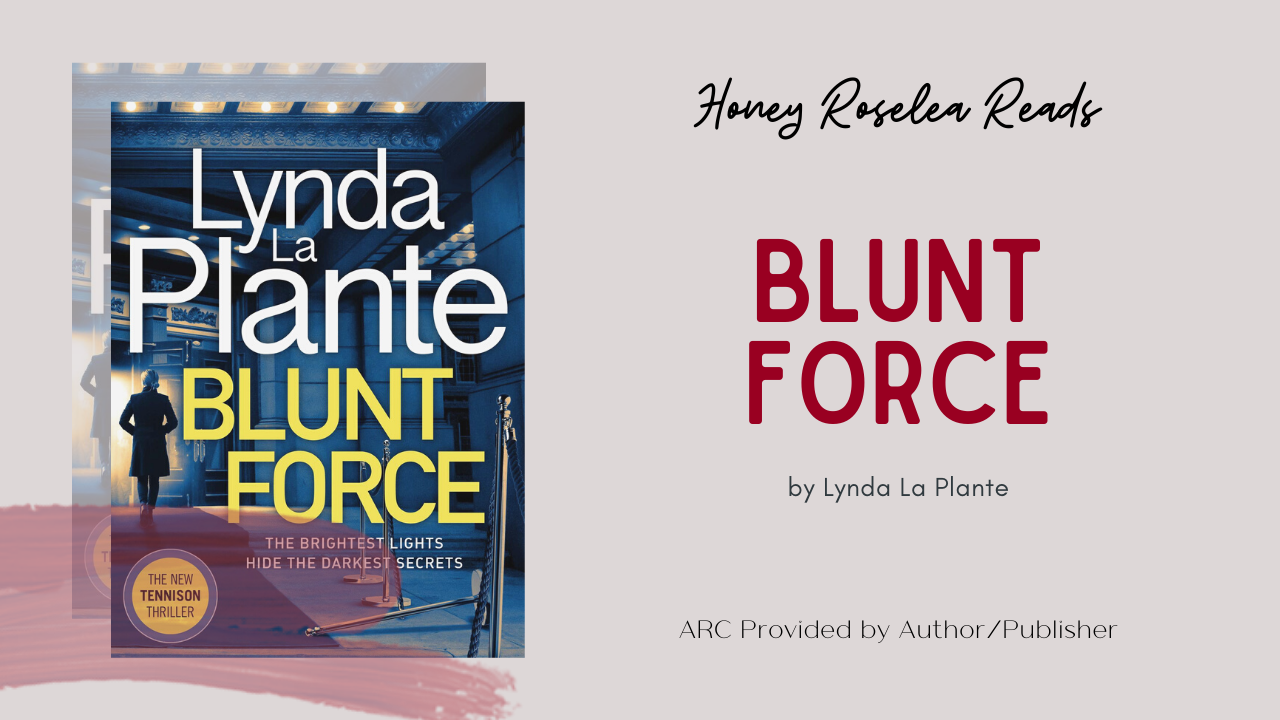 Blunt Force by Lynda La Plante is a murder mystery and a perfect alternative for a modern Agatha Christie.

Our main character, Detective Jane Tennison investigates the brutal murder of Charles Foxley and Blunt Force is the story of how Jane discovers the truth behind his murder. Jane is a determined detective and as one of the

Jane Tennison must navigate the salacious world of theatre to solve a brutal murder in the heart of London’s West End, in the brilliant new thriller from the Queen of Crime Drama, Lynda La Plante.

Things can’t get much worse for detective Jane Tennison. Unceremoniously kicked off the adrenaline-fuelled Flying Squad, she now plies her trade in Gerald Road, a small and sleepy police station in the heart of London’s affluent Knightsbridge.

With only petty crime to sink her teeth into, Tennison can feel her career slowly flatlining. That is until the discovery of the most brutal murder Jane has ever seen: Charlie Foxley has been found viciously beaten to death with a cricket bat – his body dismembered and disembowelled.

As a big-time theatrical agent, Foxley had a lot of powerful friends – but just as many enemies. And alongside her old friend DS Spencer Gibbs, Tennison must journey into the salacious world of show business to find out which one is the killer, before they strike again.

Blunt Force by Lynda La Plante is a murder mystery and a perfect alternative for a modern Agatha Christie.

Our main character, Detective Jane Tennison investigates the brutal murder of Charles Foxley and Blunt Force is the story of how Jane discovers the truth behind his murder. Jane is a determined detective and as one of the few female detectives, she needs to fight her way for the other officers in the force to see her true potential.

I rated Blunt Force two stars because I did not enjoy this as much as I thought I would. I am a huge fan of murder mystery so when I got the ARC for this book I was originally very excited to read this. There were somethings I enjoyed, like the detail behind the murder and the process that Jane had to do in order to investigate Charles’ murder, as well as the plot. I think the murder behind Charles Foxley was well thought out and in depth and that was one of the things I did enjoy while reading this.

But, I’m going to be honest, there were quite a lot of things I did not enjoy. In the beginning the pace was very slow and I nearly put this down and marked it as ‘did not finish’ but I decided to stick through this story in case there would be more excitement throughout the book. The beginning was boring and that is what nearly made me put this down. When I start the book I would want it to start off interesting and really pull me in. Blunt Force did not do this for me.

And while this is my first book by Lynda La Plante as well as the first book I’m reading in the Tennison series, I wanted to give this an open mind as I knew this was my first book by her. But, for a starter, I was not a big fan of Jane. For a woman who wants to succeed in her career I just found some of her actions quite dumb. Sometimes it was as if she was just a normal girl who came into a murder mystery rather than a detective.

Along with characters, the way some of the characters that appeared in this investigation were absolutely difficult to read. I realize this is reasonable and sometimes witnesses and suspects do act somewhat similar, I felt uncomfortable and irritated while reading about them and when they made appearances. One of the characters I was not a fan of made frequent appearance throughout the story that made me nearly stop reading this. His actions were completely unnecessary and I sometimes found his attitude was completely unnecessary and I felt angry at some times with him.

While these were some of my irritating moments that I did not like, I did enjoy the story behind the murder and quite enjoyed some of the processes that Jane had to go through.