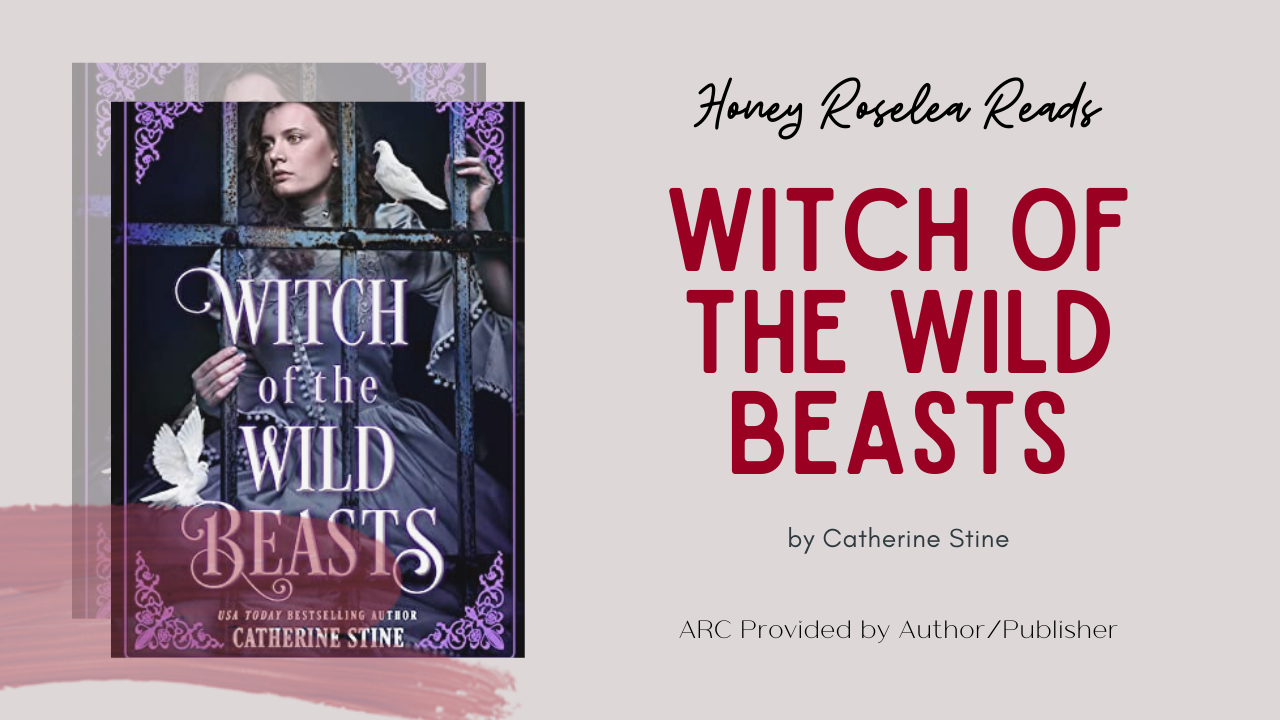 Through the mysteries of magic, Witch of the Wild Beasts shows us what it is like to have magic during a time where magic is unknown and unacceptable.

Witch of the Wild Beasts is a historical fantasy based around the times of the Witch Trials in the year 1854 around a prison where our main character, Evaline Stowe

Book: Witch of the Wild Beasts by Catherine Stine
Series: Standalone
Publication Date: January 29, 2020
(Thank you NetGalley for this e-ARC in exchange for an honest review)
**While this book has already been out I did receive it early so thank you again NetGalley!**
Tags: Middle grade, historical fiction, fantasy
Links: Goodreads | Ebook | Paperback | Hardback | Audio
Read: July 18, 2020 to July 18, 2020

When Evalina is imprisoned for witchcraft, will her supernatural bond with animals be her curse or salvation?

In 1854, Evalina Stowe witnesses the murder of her brother by Dr. Dowdrick, an enraged client at the tailor’s where they work. Desperate to stop him, she rouses a swarm of wasps that sting the doctor while she stabs him with scissors, and then flees. At a subsequent job when birds race to her defense, Evalina is declared a witch and sent to Philadelphia’s Eastern State Penitentiary.

While imprisoned, Evalina is horrified not only to learn that Dr. Dowdrick is still alive, but he’s experimenting on inmates. Determined to get inside his Eclectic Medical School, to expose his nefarious activities, she’s passionate about protecting fellow prisoners, especially Lewin, a child thief who knew her brother, and Birdy, a kind, resilient Welsh man serving time for a worker’s death while blasting granite for the railroad.

Evalina, her friends and her “wild beasts” work against time to unmask Dowdrick’s crimes when she participates with him in a symposium, showcasing Philadelphia’s premium doctors. If they fail, not only will the doctor’s evil deeds continue unchecked but Evalina and her crew will surely be hung. Actual historical figures such as Dr. Thomas Mutter and Charles Dickens spice up this thriller, brimming with historical gems. A second place winner in RWA’s 2019 Valley Forge Sheila Contest.

Through the mysteries of magic, Witch of the Wild Beasts shows us what it is like to have magic during a time where magic is unknown and unacceptable.

Witch of the Wild Beasts is a historical fantasy based around the times of the Witch Trials in the year 1854 around a prison where our main character, Evaline Stowe, Eva for short is serving time for a murder she did not commit.

Evaline, having witnessed the murder of her younger brother, Todd, a few months before fleeing. When she finds work once more, she ends up being accused of murder that was caused by the birds she helped take care of, not by her actions whatsoever.

I gave Witch of the Wild Beasts three stars, liking the historical aspect and the magical aspect to this book. I liked the way Eva was very in control with herself and exploring her powers throughout the book made her grasp her abilities to summon and control insects and birds and others.

I found it interesting the way Eva used insects and other animals to communicate especially when she was in the prison cell to send notes and not be caught by the guards. She was very strong headed and determined to leave the prison, so when she had made began to make friends with some of the other prisoners. It was then that she realized that the man who had murdered her brother was also one of the doctors that would be working at the prison.

This book was very interesting to read and learn more about Eva’s capabilities to but I felt like there were a few things that were missing throughout the book. While I liked the detail behind Eva’s powers and her ability to control insects and creatures, I felt like the plot was lacking and it didn’t capture my attention as much as I would like to.

I think this makes a great middle grade and young adult historical fantasy book but for me, it didn’t fit well and I wish I liked it a little more.

Thank you again to NetGalley for an ARC in exchange for an honest review.