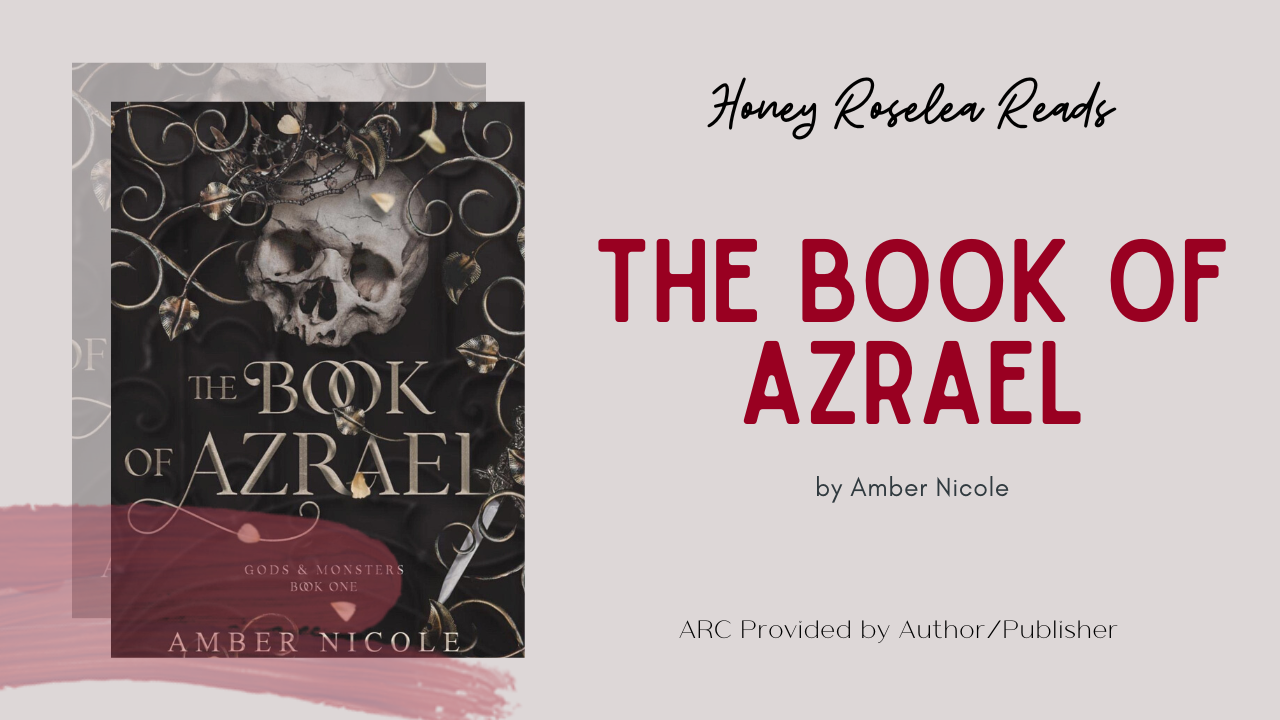 As the second in command to the powerful Kaden, Dianna Martinez is only looking to do one thing, protect her younger sister, Gabby, instead. Especially after giving Gabby her mortal life in exchange for forever serving under Kaden. Now, Dianna is left wondering whether she should escape from the hold Kaden has on her and run away to a far distant land where no one would

Book: The Book of Azrael by Amber Nicole
Series: Gods and Monsters #1
Publication Date: April 25, 2022
(Thank you NetGalley for this e-ARC in exchange for an honest review)
**While this book has already been out I did receive it early so thank you again NetGalley!**
Tags: Adult, fantasy, romance, enemies to lovers, supernatural, gods and monsters
Links: Goodreads | Amazon | Book Depository | Thrift Books | Abe Books
Read: August 26, 2022 to August 29, 2022

A thousand years ago, Dianna gave up her life in the deserts of Erioa to save her dying sister. She called upon anyone who would listen, not expecting a monster far worse than any nightmare to answer. Now she does what Kaden asks, even if that means securing an ancient relic from the very creatures that hunt her.

In the old world his name was Samkiel. In the new world it is Liam, but one title remains true throughout time. He is the World Ender, a myth to his enemies, a savior and King to those loyal to him. After the Gods War, he locked himself away, hiding from the world. He denied his crown and responsibilities, leaving the very ones who needed him most to deal with the fallout of the death of their homeworld. Now an attack on those he holds dear sends him back to the one realm he never wished to visit again and into the sights of an enemy he thought imprisoned eons ago.

Now enemies older than time must put aside their differences and work together in hopes of saving both their world and every realm in between.

As the second in command to the powerful Kaden, Dianna Martinez is only looking to do one thing, protect her younger sister, Gabby, instead. Especially after giving Gabby her mortal life in exchange for forever serving under Kaden. Now, Dianna is left wondering whether she should escape from the hold Kaden has on her and run away to a far distant land where no one would find Dianna and Gabby. But, that is until Kaden wants something extremely valuable, and Dianna is now forced to be in the middle of two power hungry men, Kaden, and new introduced Liam, originally Samkiel, a millennium old God who has now come back.

I gave The Book of Azrael five stars, really enjoying the way Amber Nicole writes the tension between Liam and Dianna. It is so subtle yet in your face when you least expect it, including a romantic relationship. The more I pushed through this book, I really began to see these characters for the in depth portrayal that is done really well in this book. I like that The Book of Azrael was filled with irritation yet of aww as well an extra balance all the powers and the magic of the world. I think that this concept was well executed and fit well in this book.

I think the one part I enjoyed was the chemistry between Liam and Dianna. They were pure enemies from the start, Liam and his people would kill Dianna and her ancestors, yet when they came together, they unknowingly fit together. I think the one thing I enjoyed was the discovery of their love for each other. The build up of their relationship was slow but worth it because we were able to experience all the emotions that they felt for each other throughout the book; anger, love, lust, sadness, and also understanding. Liam and Dianna were unknowingly perfect for each other and it made me enjoy their relationship more.

I had such a fun time reading this and the one thing I must say is that the ending made me realize that we don’t have a release date for book 2, or any information for book 2. But, I’m extremely excited to dive into the world again whenever book 2 comes out.

Thank you again to NetGalley for providing me with an ARC in exchange for an honest review.