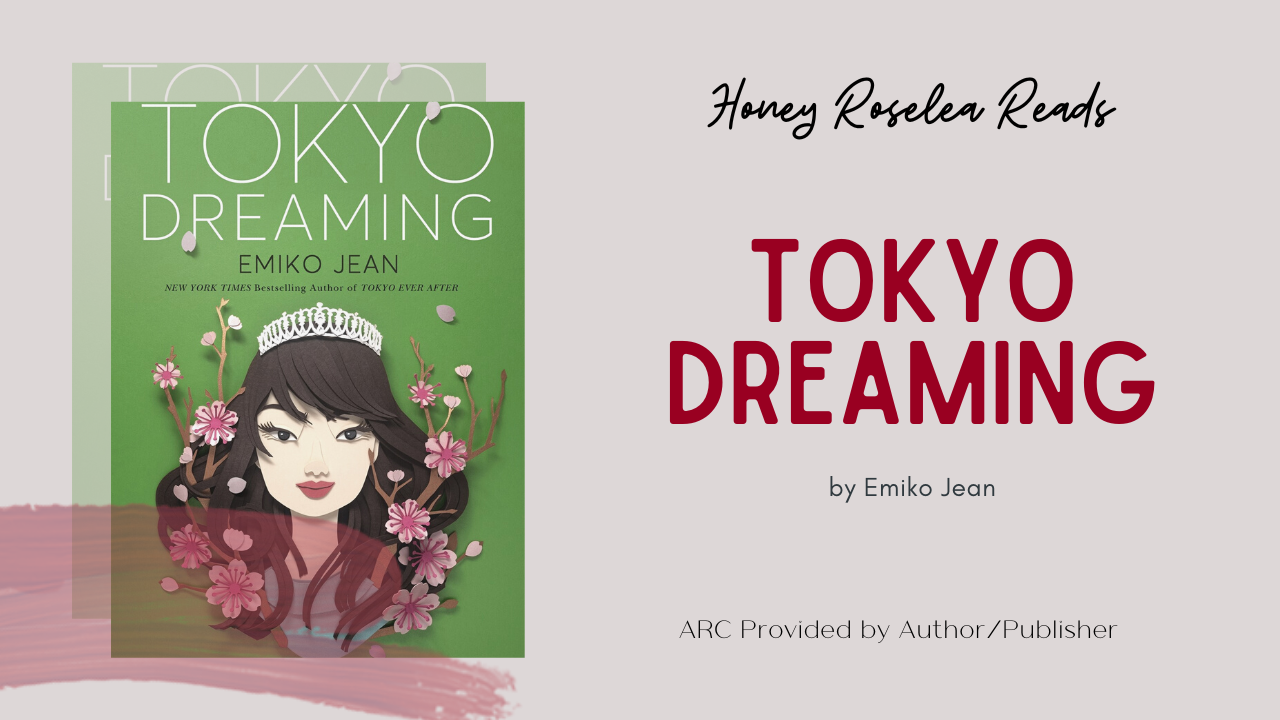 Book: Tokyo Dreaming by Emiko Jean
Series: Tokyo Ever After #2 | Review of book one: Tokyo Ever After here [ it’s a very short review ]
Publication Date: May 30, 2022
(Thank you NetGalley for this e-ARC in exchange for an honest review)
**While this book has already been out I did receive it early so thank you again NetGalley!**
Tags: New Adult, romance, royal, Japan, college
Links: Goodreads | Amazon | Book Depository | Thrift Books | Abe Books
Read: August 14, 2022 to August 15, 2022

When Japanese-American Izumi Tanaka learned her father was the Crown Prince of Japan, she became a princess overnight. Now, she’s overcome conniving cousins, salacious press, and an imperial scandal to finally find a place she belongs. She has a perfect bodyguard turned boyfriend. Her stinky dog, Tamagotchi, is living with her in Tokyo. Her parents have even rekindled their college romance and are engaged. A royal wedding is on the horizon! Izumi’s life is a Tokyo dream come true.

Her parents’ engagement hits a brick wall. The Imperial Household Council refuses to approve the marriage citing concerns about Izumi and her mother’s lack of pedigree. And on top of it all, her bodyguard turned boyfriend makes a shocking decision about their relationship. At the threat of everything falling apart, Izumi vows to do whatever it takes to help win over the council. Which means upping her newly acquired princess game.

But at what cost? Izumi will do anything to help her parents achieve their happily ever after, but what if playing the perfect princess means sacrificing her own? Will she find a way to forge her own path and follow her heart?

There will be minor spoilers due to this review being the second book in the series and directly after the events of book 1. I highly recommend reading book 1: Tokyo Ever After first due to the events in book 2.

I gave Tokyo Dreaming four stars, really enjoying the overall story and the growth of Izumi throughout the book. We can see how much family means to her and making them happy. One thing I liked was the bonding and also the communication between Izumi and her family. As her parents were getting engaged, facing the scrutiny of the public eye as well as the royal family and the people that dictate the relationships of each royal member. Including Izumi’s relationship with her cousins, whom she called the “Shining Twins”.

The one big part of Tokyo Dreaming is the beginnings of Izumi’s relationship with Eriku, her tutor and friend that she makes at the University of Tokyo. We can also see Akio and Izumi’s relationship hit a toll as they both discover themselves, Akio in pilot academy, and Izumi trying to get into the University of Tokyo as well as making her family proud, including the public that has their eye on Izumi. I really enjoyed Eriku’s roll in this story and I do wish we were able to see more throughout the book. I’m glad that Eriku was able to resolve his own family issues and gain the confidence he really needed to believe in himself.

Now the biggest part of Tokyo Dreaming that I was looking out for was Akio and Izumi. Their relationship really developed in Tokyo Ever After and seeing them go through hardships throughout this book was something I felt both irritated me and also made me agree with their hardship. I think that because of the strain in their relationship, it really made Izumi discover who she was as a person. She discovered that she didn’t have to please everyone and perhaps also made her realize that maybe she really needed to communicate better with the people she loved.

Akio was someone that while I realize he needed the space, I found that the lack of communication on his end was what put me off of their relationship. As much as I liked them together, I felt that Akio simply ran away too fast from his relationship with Izumi. Yes they both had their problems that they needed to solve, but by the end of the book, I felt that I wasn’t feeling the relationship between Izumi and Akio. Though their resolution at the end of the book made me happy, I did’t feel the chemistry between them the way. I felt in Tokyo Ever After.

Although I’m giving Tokyo Dreaming four stars, I did have a fun time reading this book and also thoroughly enjoyed the audiobook. I think that the narrator does a phenomenal job capturing Izumi’s energy and spirit (and heartbreak and sadness) throughout the book.

Tokyo Dreaming has been out for two months when I write this review and I was able to listen to the audiobook which I preordered through Libro.FM. I recommend this cute New adult romance and if you miss Japan, this definitely made me miss it more. The urge to go back to Japan was high.

Thank you again to NetGalley and Flatiron books for inviting me to read Tokyo Dreaming and for providing me with and eARC in exchange for an honest review.