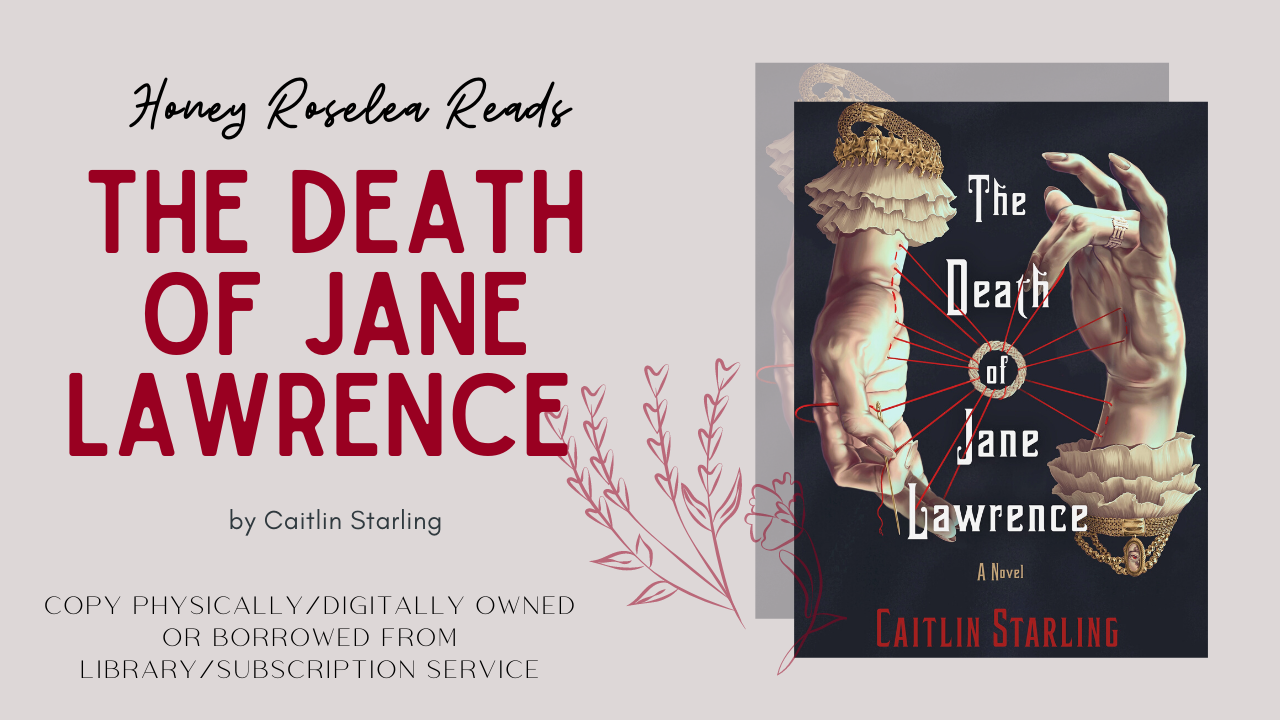 The Death of Jane Lawrence shows young Jane Lawrence after her marriage to the esteemed Dr. Augustine Lawrence. But, unknowingly, she marries into something deeper, something, sinister. When Jane marries Dr. Augustine, she thought she would only be marrying into a business detail, where they could both work with each other side by side and not worry about love and relationship

Practical, unassuming Jane Shoringfield has done the calculations, and decided that the most secure path forward is this: a husband, in a marriage of convenience, who will allow her to remain independent and occupied with meaningful work. Her first choice, the dashing but reclusive doctor Augustine Lawrence, agrees to her proposal with only one condition: that she must never visit Lindridge Hall, his crumbling family manor outside of town. Yet on their wedding night, an accident strands her at his door in a pitch-black rainstorm, and she finds him changed. Gone is the bold, courageous surgeon, and in his place is a terrified, paranoid man—one who cannot tell reality from nightmare, and fears Jane is an apparition, come to haunt him.

By morning, Augustine is himself again, but Jane knows something is deeply wrong at Lindridge Hall, and with the man she has so hastily bound her safety to. Set in a dark-mirror version of post-war England, Starling crafts a new kind of gothic horror from the bones of the beloved canon. This Crimson Peak-inspired story assembles, then upends, every expectation set in place by Shirley Jackson and Rebecca, and will leave readers shaken, desperate to begin again as soon as they are finished.

The Death of Jane Lawrence shows young Jane Lawrence after her marriage to the esteemed Dr. Augustine Lawrence. But, unknowingly, she marries into something deeper, something, sinister. When Jane marries Dr. Augustine, she thought she would only be marrying into a business detail, where they could both work with each other side by side and not worry about love and relationship, and chemistry between each other. But, the day she is married, she is forced to stay at Lindridge Hall, Augustine’s home, in which he tells Jane to never step foot in Lindridge Hall. Unbeknownst to her, there is an underlying and sinister trap in his home.

I gave The Death of Jane Lawrence 3.5 stars, enjoying the way it captured my attention and the way it made me question everything I was reading. That being said, I felt that, as a beginner reader of the horror genre, it just wasn’t scary enough. I felt that The Death of Jane Lawrence read as a supernatural thriller that I felt wasn’t jaw-dropping scary enough. While reading, I felt that I wasn’t sitting on the edge of my seat, anticipating for a jump scare or a big plot twist to happen. I think I was looking forward to a haunted house, ghosts and spirits torturing Jane or Augustine, while their servants thought they were going mad, but, I wasn’t really left with a scared or worried feeling for both Jane and Augustine.

I felt that the inclusion of the magic perhaps also made the plot a little less scary. This was because I think that with the ghosts and the spirits lingering in Lindridge Hall, it felt less unique, a woman trying to defeat the spirits that haunt Lindridge Hall and in the end, like most, defeat and free Lindridge Hall’s ghosts. This is, however, my opinion that the inclusion of magic just felt unsatisfactory. And then after, I just felt that the ending as well, could have been more fleshed out as I felt that it was kind of bland by the end.

At the end of the day, The Death of Jane Lawrence was a good horror read and I would still recommend it nonetheless. This definitely helps for beginner horror readers like me perhaps get into the genre. I think that if The Death of Jane Lawrence had a little more terrifying plot points and perhaps after the climax, it had a more reinforced plot point.