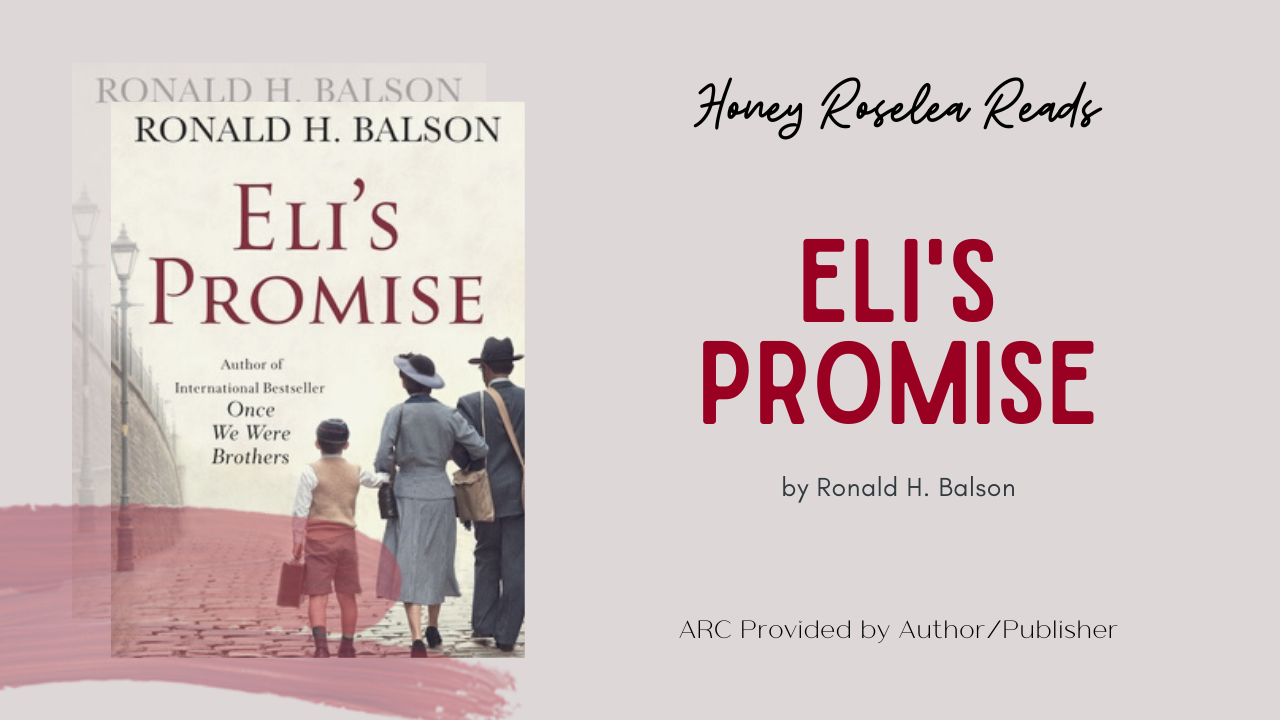 Eli’s Promise made my jaw drop multiple times through shock and sadness and the story that Eli Rosen tells over three different time periods of his life.

Spanning three different time periods, the story of Eli Rosen has slowly brought to my attention the hardships that Jewish families had to go through during the Nazi occupation

A “fixer” in a Polish town during WWII, his betrayal of a Jewish family, and a search for justice 25 years later—by the winner of the National Jewish Book Award.

Eli’s Promise is a masterful work of historical fiction spanning three eras—Nazi-occupied Poland, the American Zone of post-war Germany, and Chicago at the height of the Vietnam War, all tied together by a common thread. Award-winning author Ronald H. Balson explores the human cost of war, the mixed blessings of survival, and the enduring strength of family bonds.

1939: Eli Rosen lives with his wife Esther and their young son in the Polish town of Lublin, where his family owns a construction company. As a consequence of the Nazi occupation, Eli’s company is Aryanized, appropriated and transferred to Maximilian Poleski—an unprincipled profiteer who peddles favors to Lublin’s subjugated residents, and who knows nothing at all of construction. An uneasy alliance is formed; Poleski will keep the Rosen family safe if Eli will manage the business. Will Poleski honor his promise or will their relationship end in betrayal and tragedy?

1946: Eli resides with his son in a displaced persons camp in Allied occupied Germany hoping for a visa to America. His wife has been missing since the war. One man may know what has happened to her. Is he the same man who is now sneaking around the camps selling illegal visas?

1965: Eli Rosen rents a room in Albany Park, Chicago. He is on a mission. With patience, cunning, and relentless focus, Eli navigates Chicago’s unfamiliar streets and dangerous political backrooms, searching for the truth. Powerful and emotional, Eli’s Promise is a rich, rewarding novel of World War II and a husband’s quest for justice.

Eli’s Promise made my jaw drop multiple times through shock and sadness and the story that Eli Rosen tells over three different time periods of his life.

Spanning three different time periods, the story of Eli Rosen has slowly brought to my attention the hardships that Jewish families had to go through during the Nazi occupation. The way that Eli was faced with the manipulation and cat and mouse games with Maximilian Poleski in the safety of his family. This made the story very interesting because throughout each part of the story appears a man that has been in the middle of all of it, one that Eli recognizes well and has changed Eli’s life for the worst.

I gave Eli’s Promise five stars, in awe with the writing and the way that I sat on the edge of my seat when reading about Eli and his family.

In 1939, Eli and his family, his wife Esther and his son Izaak, are living in Lublin, a Polish town when the Nazi’s invade their town. Life for the Rosen family changes for the worst and now, Eli must deal with Maximilian Poleski, an evil man who puts fake trust into the people he works with in order to provide protection for his family.

In 1946, Eli lives in a displaced persons camp in Germany with Izaak in hopes to get a visa to America. Ever since the war and Lublin, his wife, Esther has been missing and only one man knows where she could have gone. Now, he discovers that there is a man selling visas illegally that sounds like someone he once knew and must find out who this man is, and if he is the person that had changed Eli’s life for the worst.

In 1965, Eli is now in a rented room in Albany Park, Chicago, alone and living his life a changed man from the events of his past, seeking justice for his family and discover the truth.

I found Eli’s Promise a fascinating read and quite enjoyable even though the premise of the story is saddening. The struggles that Eli goes through during each time period for his family shows the lengths that Eli goes through and how far and willing he is to make a deal with the devil – multiple times – for his family. This story has made me realize that many things throughout this book are something that families had to go through during the Nazi occupation.

This book was hard to put down, each chapter, each moment, was a cliffhanger and left me wanting more. I enjoyed this very much and found my heart clenching each time something happened.

Thank you again to NetGalley for an ARC in exchange for an honest review.