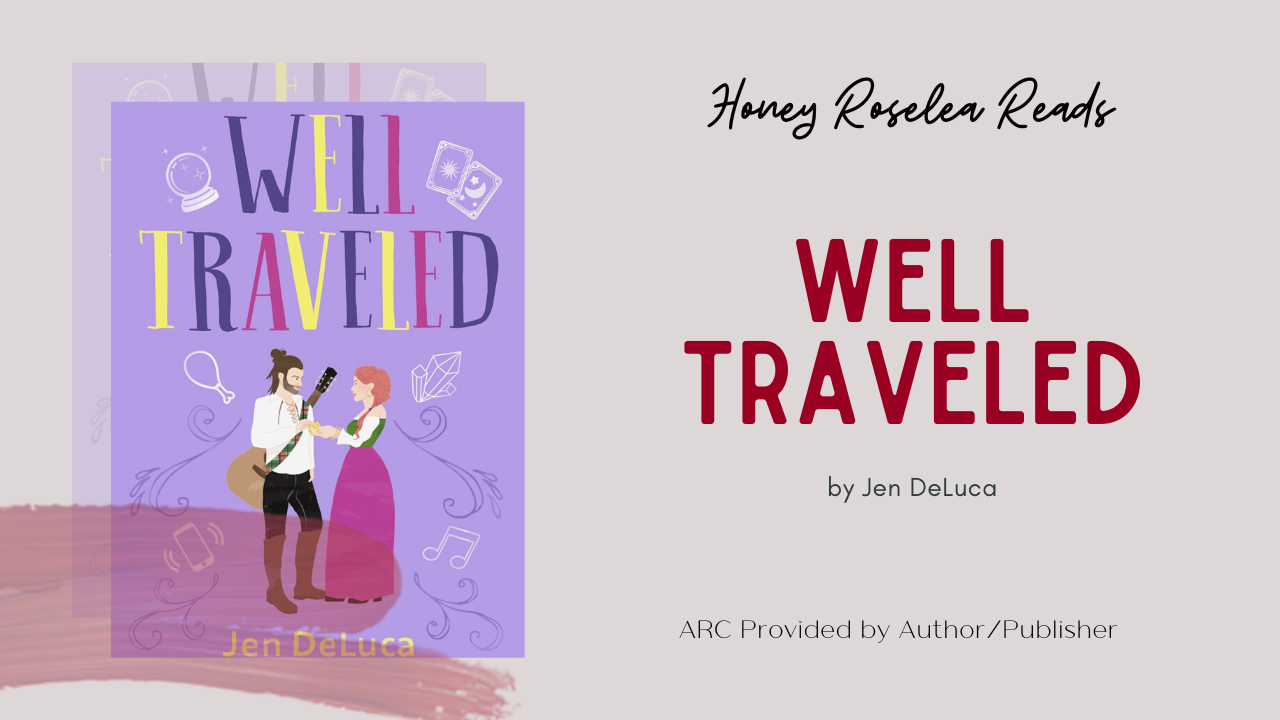 After a life altering decision, Louisa “Lulu” Malone decides to cut out technology and start focusing on herself, and that starts with traveling with the Dueling Kilts, a group of handsome men in kilts as they play at Renaissance Faires and win hearts. But, along the way, Lulu meets Dex, a key member of the Dueling Kilts

Book: Well Traveled by Jen DeLuca
Series: Standalone
Publication Date: December 5, 2022
(Thank you NetGalley for this e-ARC in exchange for an honest review)
**While this book has already been out I did receive it early so thank you again Berkley Romance!**
Tags: Adult, romance, band, Renaissance Faire
Links: Goodreads | Amazon | Book Depository | Thrift Books | Abe Books
Read: January 8, 2023 to January 9, 2023

A high-powered attorney from a success-oriented family, Louisa “Lulu” Malone lives to work, and everything seems to be going right, until the day she realizes it’s all wrong. Lulu’s cousin Mitch introduced her to the world of Renaissance Faires, and when she spies one at a time just when she needs an escape, she leaps into the welcoming environment of turkey legs, taverns, and tarot readers. The only drawback? Dex MacLean: a guitarist with a killer smile, the Casanova of the Faire… and her traveling companion for the summer.

Dex has never had to work for much in his life, and why should he? Touring with his brothers as The Dueling Kilts is going great, and he always finds a woman at every Faire. But when Lulu proves indifferent to his many plaid charms and a shake-up threatens the fate of the band, Dex must confront something he never has before: his future.

Forced to spend days and nights together on the road, Lulu’s interest in the kilted bad boy grows as he shows her a side of himself no one else has seen. The stresses of her old lifestyle fade away as she learns to trust her intuition and follow her heart instead of her head. But when her time on the road is over, will Lulu go with her gut, or are she and Dex destined for separate paths?

After a life altering decision, Louisa “Lulu” Malone decides to cut out technology and start focusing on herself, and that starts with traveling with the Dueling Kilts, a group of handsome men in kilts as they play at Renaissance Faires and win hearts. But, along the way, Lulu meets Dex, a key member of the Dueling Kilts and simply can’t fight off her attraction for him. Who doesn’t like a man in kilts, especially with the talent that Dex has, Lulu realizes that there is something about Dex that makes her intrigued.

I gave Well Traveled four stars, really enjoying the aspect of the Renaissance Faire and how Lulu was able to find herself without the restrictions of technology and the pressures of her old job. Now that Lulu went through some life altering changes, the Renaissance Fair has the people that she needs to surround herself with. I really enjoyed Dex and Lulu and found themselves really cute. I thought that Lulu’s character growth was really enjoyable and I felt that she was so easy to connect with. I had fun reading this and seeing all of these characters reappear felt really nice. When we saw Dex in book two, Well Played, I found that his character was okay and I didn’t really see his character as someone who was interesting, but, I liked his character in Well Traveled and felt that he matched Lulu really well.

Thank you again to Berkley Romance for inviting me to read Well Traveled and for providing me with an ARC in exchange for an honest review.