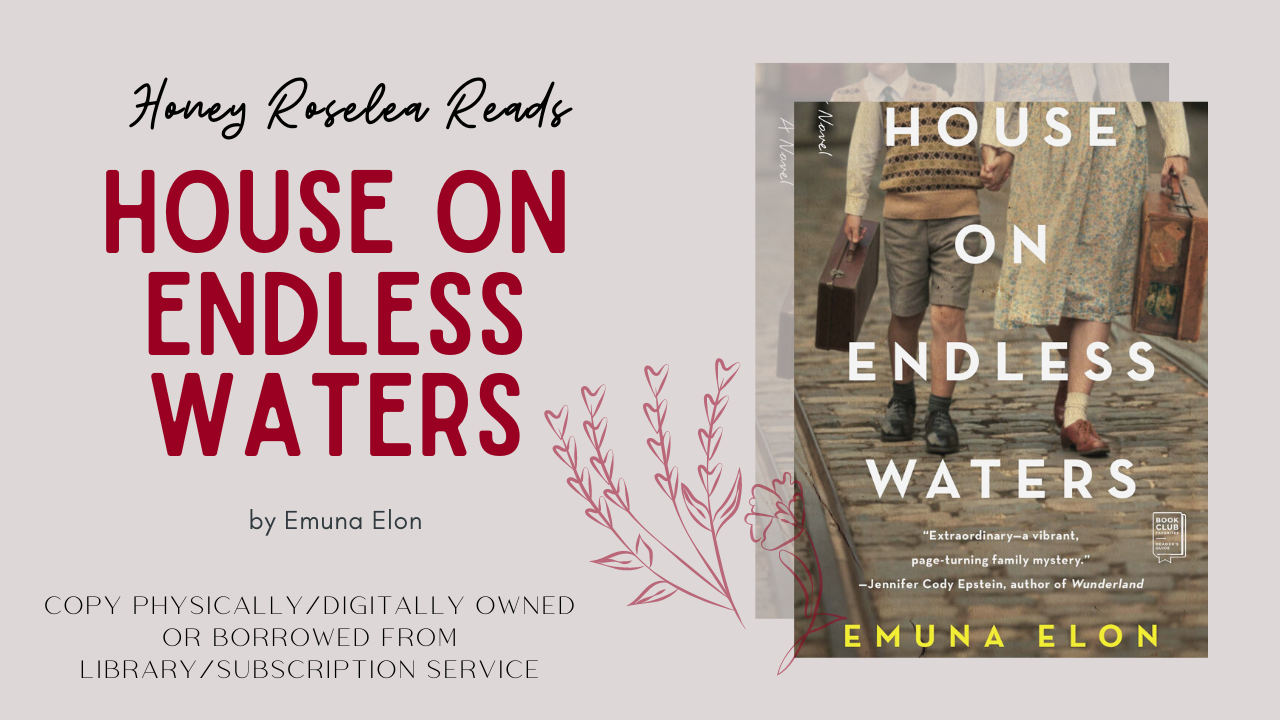 Through the hardships of keeping her children alive, Sonia Blum discovers that there is a cost to protecting her children from being taken from her. House on Endless Waters tells the story of Yoel Blum, discovering the secrets of his past, the ones that were kept from him as throughout his whole life by his mother. It’s not until Yoel decides to take a trip to his birthplace, Amsterdam, where he truly discovers what has been hidden from him by his loving mother.

**Disclaimer: This review was for my English 271 class on the Holocaust. In no means is this supposed to be a professional review. Also, original format was on a Word Doc so please excuse the mess.**

Format: This review post will be separated into two parts. Part one is my paper on Sonia Blum, where we discussed her character in the beginning of House on Endless Waters and what I perceived of her throughout the book, discovering the secrets that were revealed and how this shifts of my understanding of Sonia. PART ONE WILL HAVE SPOILERS. Part two is a review of the book as a whole. This is my own thoughts and is not related to my paper. PART TWO WILL NOT HAVE SPOILERS.

The Formidable Tale of a Mother’s Trauma

Through the hardships of keeping her children alive, Sonia Blum discovers that there is a cost to protecting her children from being taken from her. House on Endless Waters tells the story of Yoel Blum, discovering the secrets of his past, the ones that were kept from him as throughout his whole life by his mother. It’s not until Yoel decides to take a trip to his birthplace, Amsterdam, where he truly discovers what has been hidden from him by his loving mother.

The depiction of Sonia Blum in the beginning of House on Endless Waters told me of a mother that deeply cared about her children, however, because of how much she cared, especially when it came to Yoel’s past, it became evident that she was a secretive person. “Remember, Yoel, and never forget: You’ve got a mother and you’ve got a sister and you’ve got yourself. That’s all; nothing else matters” (pg. 45, 54). This quote had shown me Sonia’s character in the beginning, a mother that cared for her children but what was it that had happened in her past during the Holocaust that forced her to bar off memories of the past to her children? When Yoel had talked about her in the beginning of the book, she was a closed off spirit, going through her life day by day in a routine. She was afraid to make friends with others, keeping herself at home, even refusing to talk to the neighbors in fears of her past coming back to haunt her (pg. 54). This was a theme that made me want to ask, what was it about her past that is forcing her to run every chance she get? What was forcing her to be so closed off?

It isn’t towards when Yoel begins to learn about his history, when these questions I had about Sonia began to surface. We are shown what happened in the past, to her, her husband Eddy, Nettie, and to an unknown boy whom Yoel thinks is his brother. In the beginning of the book, I had perceived Sonia as a mother with trauma from the Holocaust that forced her to be so closed off. Perhaps the loss of her son and husband was too much for her, prompting her to stay hidden from the outside world, never getting too close to anyone for fear of bringing up her past. But, the discovery that Yoel was actually Sebastian Rosso, the son of Martin Rosso who was a friend of Sonia and her husband Eddy made the notion of trauma come to light (pg. 275-292). It wasn’t trauma that forced Sonia to be so shut off from meeting people or getting to know people, it was the fear that someone would recognize her and know that Yoel was not truly her son, whom we discover is named Leo, but the son of Martin Rosso, Sebastian.

Sonia took great lengths in protecting her secret of her now son Yoel, however, this forced him to grow up obeying Sonia’s every word. He was trusting of her every word, afraid that if he spoke out of line, it would make her sad or angry. This quote on page 94, when he had talked about Sonia making a sweater for him states, “He just did what she told him, submitting completely, not moving a millimeter”. To me, I recognized Yoel’s obedience to his mother as a trauma. This is because her push to keep her secret contained had pushed him to follow her every word, “… heaven forbid that he cause her sorrow, heaven forbit that he let her see him with his head uncovered. Not even after her death” (pg. 124). Even after her death, we can see that Yoel still follows her every word, but this quote showed me an underlying fear that Yoel had, perhaps from the past where he disobeyed her, instigating fear after making Sonia sad or angry.

Although we see Sonia as a loving mother, an important phrase sticks out, “Those waters have already flown onward” (pg. 11, 41). To me, this quote shows growth, a way to move forward from the trauma set in Sonia’s life. However, from the beginning, with Sonia’s trauma and fear of letting anyone in, my views are that the waters “have not flown onward”, but instead are gathering as lake. Her traumatic past in Amsterdam had prevented her from being truthful to her son. Even after the death of Sonia, life had found a way to speak its truth.

I gave House on Endless Waters five stars, loving the way Emuna Elon had written about Yoel’s family, his mother, wife, sister, and the truth about what had happened in Amsterdam before they moved to Israel. The secrets that were hidden by his mother were unveiled, discovering the truth of who Yoel was in Amsterdam compared to who he is now. The level of detail that Emuna Elon put when writing the secrets that his mother was hiding was spectacular. we are given an in depth understanding of what Sonia Blum, Yoel’s mother had gone through in Amsterdam, and what secrets she had accumulated and was forced to hide from her son.

House on Endless Waters was written phenomenal, a tale of secrets, lies, and family, and how it can shine the light on the past as well as Yoel’s mother, but also force Yoel to discover his own family. I loved the way we are given the past and present and how we discover what happened in Amsterdam, causing memories to rise as Yoel remembers his mother. This story comes together and shows the power that family has as Yoel makes this journey alone, only to discover his friends and family along the way.

House on Endless Waters was a perfect five stars for me and the story of trauma from the Holocaust shows what an amazing job Emuna Elon did when telling the story of Yoel Blum.