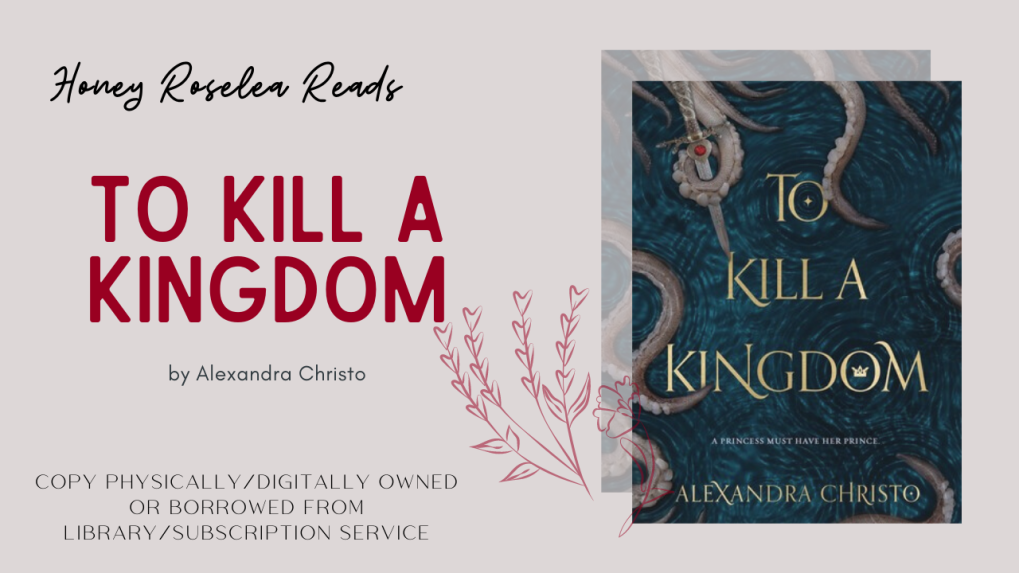 In a world full of war, humans versus sirens, the Princes’ Bane hunts the most sought out Prince’s heart and the Siren Killer is out to hunt the Princes’ Bane. But when chance happens, they must work together to kill their mutual enemy. To Kill a Kingdom follows Princess Lira, the Princes’ Bane, and the most lethal siren of all is ready to take the hearts

Princess Lira is siren royalty and the most lethal of them all. With the hearts of seventeen princes in her collection, she is revered across the sea. Until a twist of fate forces her to kill one of her own. To punish her daughter, the Sea Queen transforms Lira into the one thing they loathe most—a human. Robbed of her song, Lira has until the winter solstice to deliver Prince Elian’s heart to the Sea Queen or remain a human forever.

The ocean is the only place Prince Elian calls home, even though he is heir to the most powerful kingdom in the world. Hunting sirens is more than an unsavory hobby—it’s his calling. When he rescues a drowning woman in the ocean, she’s more than what she appears. She promises to help him find the key to destroying all of sirenkind for good—But can he trust her? And just how many deals will Elian have to barter to eliminate mankind’s greatest enemy?

In a world full of war, humans versus sirens, the Princes’ Bane hunts the most sought out Prince’s heart and the Siren Killer is out to hunt the Princes’ Bane. But when chance happens, they must work together to kill their mutual enemy.

To Kill a Kingdom follows Princess Lira, the Princes’ Bane, and the most lethal siren of all is ready to take the hearts of any prince in order to gain power. She kills princes in order to take their power and does it with no remorse. Prince Elian of Midas is the siren killer, ready to kill any siren he comes across. Any siren that has ever killed a human, he will kill.

I gave To Kill a Kingdom four stars, absolutely loving what a strong character Princess Lira was. She was not your typical princess, she really lived up to her name as the most lethal siren of all and I admired her throughout the whole book. I loved the relationship between Lira and Elian. There was not too much love but I felt that the development they had when going from enemies to lovers was amazing.

The amount of hate that Lira put into when interacting with Elian was amazing and she was such an amazing character. I guess this is what happens when you have to work with your whole races’ literal enemy. And I felt that the build-up of their romance was not at all fast. I felt that their romance was actually quite unexpected and slow that it made it perfect for the enemies to lovers setting. The execution for Lira and Elian’s relationship was written perfectly and I really enjoyed it.

Their relationship was more of a side plot and the whole focus was truly on working together to kill their mutual enemy and I felt that their relationship didn’t take away any part of the main plot at all. It was done really well and I was left thoroughly impressed throughout To Kill a Kingdom.

Lira was the best part of the book and it wasn’t because she was the main character. I felt that she was the perfect heroine and the perfect badass character. I felt that throughout To Kill a Kingdom, her relationship with her mother, the Sea Queen, had such a good representation between a parent and child that does not have a loving relationship.

I felt that To Kill a Kingdom was such an enjoyable book and a fantastic introduction to pirate fantasy books and even mermaid/siren retellings.

I’ve been loving Jayci Lee’s books so I thought I’d feature The Dating Dare. I don’t know anything about this book but I’m super excited to go in blind! Have you read this book? What were your thoughts?
After being invited to read The Highland Games, I ended up preordering it and am super excited to read it! I’ve been obsessed with Highland related romances and can’t wait to read this! Thank you @eviealexanderauthor for inviting me to read this!
If you haven’t read Don’t Kiss the Bride by Carian Cole, this is the time to read it. This is a TERRIFIC age gap, slow burn romance and you should read this asap. I fell in love with this book and the audiobook?? Fantastic✨ Desiree Ketchum and Aiden Snow did a stunning job and I’m so glad I have both the physical book and audiobook. So, if you haven’t read this, do it!
If anyone has gotten Once Upon a Broken Heart, it’s cover is absolutely stunning. I’m so glad I got this edition! I love it with and without the dust jacket and also I just can’t wait to read it! It’s currently on my November TBR!!