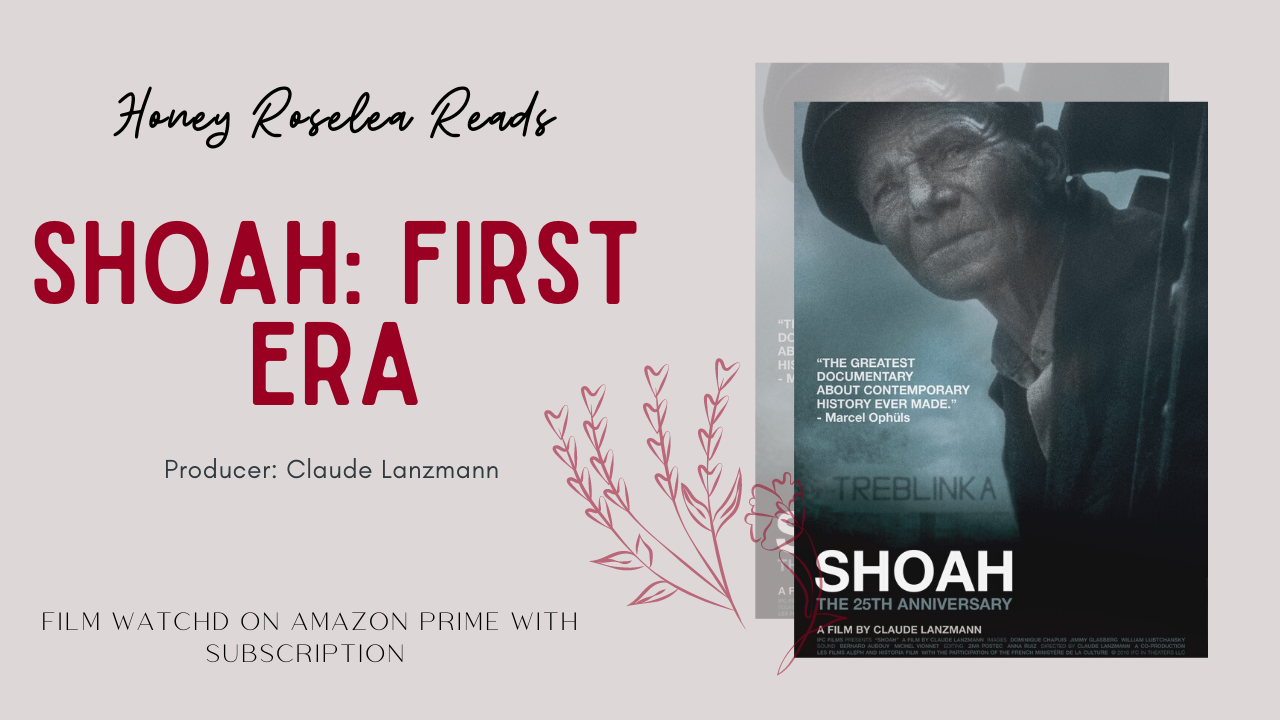 The creation of Shoah by Claude Lanzmann had taken eleven years to film (Smith, 2018). In 1973, Lanzmann was commissioned by the Foreign Ministry in Israel to create a film based on the Holocaust after Lanzmann’s first film, Israel, Why (Blumberg, Claude Lanzmann). According to the IMDB page on Shoah, there were about 31 interviewees, Lanzmann himself, and three translators, excluding editors and production managers that worked on the production of Shoah.

Disclaimer:** This review was for my English 271 class on the Holocaust. In no means is this supposed to be a professional review. Also, original format was on a Word Doc so please excuse the mess**

The creation of Shoah by Claude Lanzmann had taken eleven years to film (Smith, 2018). In 1973, Lanzmann was commissioned by the Foreign Ministry in Israel to create a film based on the Holocaust after Lanzmann’s first film, Israel, Why (Blumberg, Claude Lanzmann). According to the IMDB page on Shoah, there were about 31 interviewees, Lanzmann himself, and three translators, excluding editors and production managers that worked on the production of Shoah. Shoah, a revolutionary documentary on the truth about the Holocaust and the second film directed by Lanzmann had been filmed in the notable countries; Poland, Germany, Israel as well as featuring many more locations.

Dedicated to interviewing survivors, bystanders, and individuals that aided Nazi efforts in terminating Jewish populations in Europe, Shoah consists of oral interviews and no archival footage of wars or the concentration camps (Blumberg, Claude Lanzmann). For eleven years as Claude Lanzmann directed and interviewed survivors of the Holocaust and families of survivors for Shoah, he had to face rejections, and be denied from filming and recording until he found a solution that would help capture the truth (Shoah). During the eleven years of filming, according to Blumberg’s article on Lanzmann in the Britannica, in order to film Shoah, Lanzmann had to resort to deception and sneaking around in order to film and record the interviews done with the individuals, even resorting to using hidden cameras. The official premiere of Shoah was on April 30, 1985, in his home country, France. Soon after Shoah received the Berlin International Film Festival award and totaling 15 awards from its release date to 2019 (Shoah). In this paper, I will be going over the emotional impact that I experienced throughout watching Shoah as well as how this documentary has impacted my understanding of the Holocaust.

My knowledge preceding Shoah of the Holocaust has always been very limited, only ever learning about World War II and the Nazi occupation in the occasional middle school and high school social studies classes with short units as well as limited researching on my own time. This included books like The Tattooist of Auschwitz by Heather Morris and The Librarian of Auschwitz by Antonio Iturbe, both historical fiction book based on Jewish individuals and families that were trapped in concentration camps and forced to work until they faint and watch as their fellow prisoners die. Upon my first watch of Shoah, it felt like I was discovering the pain and heartbreak of the Holocaust for the first time. Through discovering stories of Holocaust survivors like Michael Podchlebnik who had witnessed his wife and children murdered in front of him (21:10-22:15, Shoah: First Era) or Simon Srebnik who had witnessed his parents being murdered at the age of thirteen and then later surviving a shot to his head (02:17-04:22, Shoah: First Era), we witness the unforgettable pain that each survivor went through, not knowing if they would survive or not. A notable quote from Smith’s article on Claude Lanzmann was when Columbia University professor, Annette Insdorf had said, “It’s not easy to watch Shoah; it’s not supposed to be… But it is also a reminder of human resilience, and of the need for historical awareness as well as vigilance”. Shoah had taught me more on the Holocaust than researching and reading books did. This was due to Shoah being a film solely based on interviews and seeing the hidden emotions behind the survivors as they tell their story and answer questions on their excruciating past with the Holocaust.

Throughout the film, we see various clips of scenery, showing us the present-day environment of what was once the concentration camps for the Jewish prisoners. The artistic style chosen by Lanzmann fascinated me as we not only got to hear the interviews but also got a sense of what the land that these concentration camps had previously stood on had become. Many of these sites including the extermination camp in Sobibor forest don’t show the signs of a place where Jewish victims tried to escape, only to be shot down (18:50-20:20, Shoah: First Era). Instead, we witness the silent, serene, environment  of the Sobibor forest succeeding the extermination camps. “When he [Jan Piwonski] came here [Sobibor forest extermination camp], you couldn’t guess that these trees were hiding the secret of a death camp” (22:09-22:43, Shoah: First Era). This quote resonated with me when watching this part in Shoah because it showed the things that you would have never guessed when visiting a country, of the history behind each place, even as devastating as extermination or concentration camps from the Holocaust. Through Shoah, I witnessed the shock of how much a place can have so much pain could look so beautiful. Even if I had some knowledge on the Holocaust, watching Shoahtaught me the emotional impact of the survivors who, day-by-day, put on a brave face. It pushed me to feel rather guilty for not knowing much about the Holocaust and with watching Shoah: First Era and Shoah: Second Era, I know that I would be able to understand more of what people had to go through.

Various survivors like Simon Srebnik, Michael Podchlebnik, Pan Falbrowski, and more bravely completed their interviews, leaving a somber and grieving mood lingering in the air. “Jewish people always dreamed, and that was part of their life, it was part of their messiah, that someday, they’re going to be free” (53:10-54:05, Abraham Bomba). Shoahforced me to realize the knowledge of the Holocaust was really a lot more agony and these survivors, Srebnik, Podchlebnik, and more, truly put on a brave face. This quote said by Abraham Bomba made me realize how much the Jewish population has suffered. Prior to watching Shoah, I had known that Jewish people suffered and felt pain and anguish during the time of the Holocaust, but, Shoah showed me much more than just pain and anguish. My beliefs were that the Jewish people in these concentration camps had hope, had beliefs, and had dreams that they would be free from these camps and free from the torture that they had felt. It made me feel confused, how had these people found hope and had dreams of being free during such a dark time of their life? Watching Shoah made me realize how that question loomed over me. How had people like Simon Srebnik — who survived a gunshot wound to his head and witnessed the death of his parents and other Jewish individuals — survive and become “free” after his survival from Chelmno? How had he gone through years, perhaps, of having to work at the concentration camp by dumping the ashes of the Jewish people in the river? Hope and freedom amongst survivors of the Holocaust interested me and in hopes would force me to discover more of the Holocaust that I never knew about.

People cope in various ways and we can see in the beginning of Shoah at the five minute mark when we are introduced to Michael Podchlebnik, although he survived the Holocaust, he was seen smiling. In the outside, he was smiling, but when Lanzmann had asked why he was smiling, he said, “Would you want me to cry?” This shows that although Podchlebnik had survived and gained his freedom and is free from the torture of concentration camps, he felt death, sorrow, empty, and perhaps lost from himself. At this moment, this portrayal of various emotions, it made me realize that although Shoah forces us to view the survivors and their time in the concentration camps and extermination camps, we must truly analyze and discover the emotion behind their interviews and the emotion that they ultimately received from being in the Holocaust and surviving this massacre. Having to bury or being forced to aid in the death of other Jewish people and families was not something an individual would want to go through, so the Jewish population being forced to see their comrades falling, little pieces would fall with them.